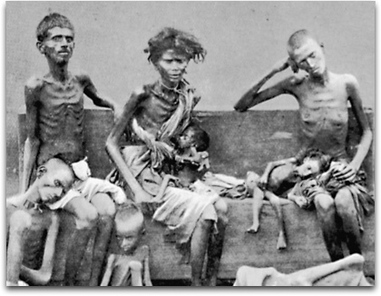 Victims of the Great Indian Famine of 1876–78.
A popular excuse for the British is that they left India in a condition in which economic success was easier to achieve. But did India become a power because of British imperialism or inspite of it? Several scholars and facts yield the conclusion that ultimately, the British Raj in many ways had a very negative impact on India’s economy. Make no mistake- The Raj was not in India to lend it resources and raise it into a world power; it was their to exploit its every riches and turn the country into a consumer of British goods. This was disastrous for the Indian economy.


Prior to British Rule, India was ruled over but prospered through the Mughal Empire. By the end of the 16th century, the wealth found in India sustained over 100 million people. There was an abundance of arable land, and the agriculture was as productive as it was in Western Europe (even a peasant who focused on subsistence farming would be fairly prosperous). Spice trade had already flung India into a player in the World Economy, but by the 17th and 18th centuries, India became one of the best producers of cotton yarn and textiles. By the 18th century, India was one of the leading manufacturing countries in the world (with a 22.6% share of the world’s GDP). There was enormous financial surplus.


The Raj Takes Over


Initially they came to plunder, but the British instead learned to trade with the Indians. This did, eventually, turn into plunder, however. The East India Company started out trading with India, but eventually came to rule it with private armies being deployed and enforcing control (though its power ended in 1857, during which the Government of India Act of 1858 transferred power officially to the British Crown).
It was the British who enforced cash cropping upon the Indians, a system which was very different from the often subsistence (and usually more eco-friendly) system which farmers practiced prior. The Raj also changed the old land revenue system to one in which the farmer had to pay revenue whether or not the monsoon failed. Ultimately, cash-cropping led to widespread famines such as one from 1896-97, which affected 69.5 million lives and resulted in the deaths of 5-20 million Indians. Programs implemented after the Raj (like Indira Gandhi's Green Revolution) led to India's turning around from a country which suffered famines due to unsustainable farming methods, to a country which exports food and has not suffered a famine in over 70 years.
The British government also gave most all of the surplus revenues it extracted from India back to England. India constantly exported more than it imported, and in the early 20th century, the Raj used the trade surplus to finance its own trade deficit and for capital repayments in London. This massively drained India’s economic wealth.
The Raj was very extravagant in the salaries it gave to its higher-level officers, but Indians were generally paid very little and were forced to be taxed. Industry in India was discouraged by Britain's policy of one-way free trade, and Europeans were favored for governmental jobs. In addition, it looted India of countless jewels, precious metals, and other resources. According to Romesh C Dutt, a complete estimate of Colonial Damage is 475 trillion dollars. India's share of the world's income went from 27% in 1700 (before British rule) to 3% in 1950 (just after the British left).


Here is a data chart of the dramatic decrease in GDP which India suffered as soon as it was colonized (and also of how it increased after independence): 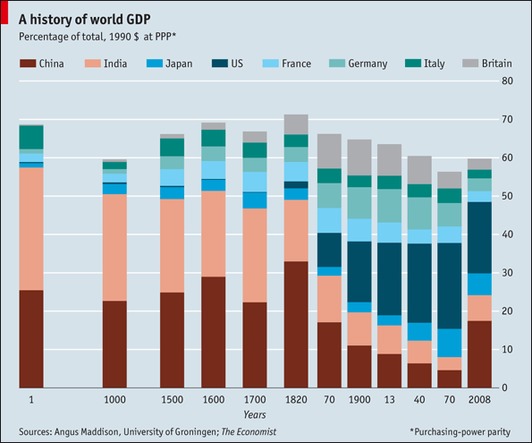