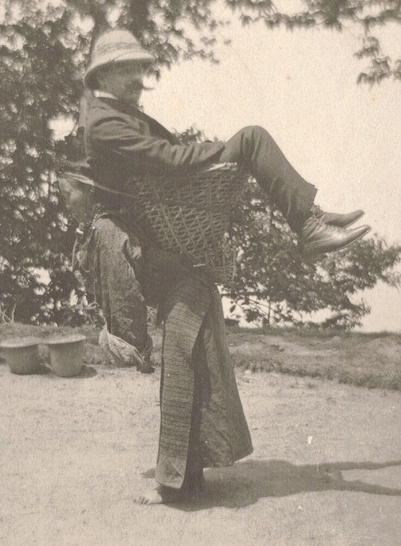 Indian woman carries British man on her back. This image is highly allegorical, as India herself suffered the weight of the British Crown, all the while helping the Raj progress.
India has a long and rich history. In the 5th century, huge portions of it were united under King Ashoka. In the 8th century, Islam established itself firmly in India. The Mughal empire ruled most of northern India from the early 16th century to the mid-18th century. It decreased in power dramatically when the British East India Company took over. This company initially only traded with the Indians, but soon began to deploy armed forces to gain control over India. The company was ultimately able to  conquer Bengal when Nawab Siraj began to speak out against increasing British military presence. When he attacked the troops, outrage was expressed by the English, fueling the desire to conquer Bengal. Robert Clive, a company colonel, was eventually able to defeat the Indian forces. This marked the turning point into the British Raj taking over India. The company retained control over India until August 2nd 1858, during which the Government of India Act was passed. This act transferred power from the East India Company to the crown. The sepoy mutiny was a widespread revolution which occurred between 1857 to 1858, and it is often referred to as the First War of Independence. The mutiny broke out in the Bengal Army and was motivated against westernization, british superiority, oppression, etc. It was, however, unsuccessful and ultimately stopped. Even though the mutiny was unsuccessful, nationalism and ideals of "swaraj" (or home-rule/self-governance) only increased. Mahatma Gandhi in particular used non-violent methods like fasting in order to protest against the British Raj. The Indian National Congress had first met in December 1885, but it was in the early 1900s in which it began to endorse "swadeshi", or the policy of "our own country". It was run by Gandhi during this period.

Various ethnic conflicts in India caused the British to call for a partition prior to Independence. For example, the Muslim League was formed to safeguard the political rights of Indian Muslims. It was a major proponent of partition and for an independent Islamic state. The divisions of the partition are considered arbitrary by many. The Indian Independence Act of 1947 was passed on July 18th, 1947, and India and Pakistan were created on August 14/15. Lord Mountbatten was the last viceroy of India. Jawaharlal Nehru was the first Prime Minister of India (with Rajendra Prasad being the first president). Since then, many other politicians have successfully led India through various hurdles, while others have been criticized for corruption and unprogressive values (such as Indira Gandhi’s controversial handling of Punjab insurgencies).

After independence, India has had tremendous economic growth and is among the world’s most powerful countries. It is culturally incredibly diverse and rich, and it is also one of the fastest developing countries today. It still has hurdles to overcome, including poverty, corruption, women’s rights issues, etc. And yet this strife co-exists with great prosperity and progress.
Powered by